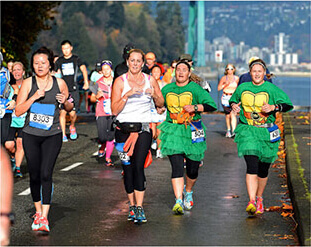 The James Cunningham Seawall Race was started by Lions Gate Road Runners in 1971, the year the last stone was laid on the Stanley Park Seawall, and named in honour of James “Jimmy” Cunningham, a Scottish stonemason who spent most of his life constructing (and overseeing construction) of the seawall. The race takes runners and walkers around Stanley Park, offering spectacular views at every turn.

James Cunningham (1873-1963)
James “Jimmy” Cunningham was a Scottish immigrant who made the Seawall his life’s work. He was a master stonemason who dedicated 32 years of his life to the Seawall from 1931 until his retirement in 1963. Even after he retired, he continued to visit (once in his pyjamas) to monitor the wall’s progress. His ashes, along with those of his wife, are interred in the cliff face opposite Siwash Rock.

Lions Gate Road Runners were the first club in BC dedicated to the sport of long distance running. Since 1971, we have been an integral part of the local running community and have established several well-known runs including the Vancouver International Marathon (now the BMO Vancouver Marathon), the Haney to Harrison relay (now the Whistler 50) and the James Cunningham Seawall Race. Learn More >>

Questions about the James Cunningham Seawall Race? Contact us at seawall@lgrr.com.